Behold The Lamb of God: The True Tall Tale of the Coming of Christ (10th Anniversary Ed.) - Andrew Peterson (2009) 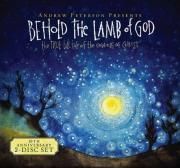 My favorite music for Advent reflection is definitely Behold The Lamb of God.  Andrew Peterson has crafted a beautiful, all-encompassing suite of songs in a timeless folksy style.  Although the studio album was only released 5 years ago, this is the tenth anniversary of the first concert performance in Nashville, so Andrew Peterson and his team has remastered the album and included a second disc of the 2008 live concert as well along with some beautiful new album artwork.

In the first half of the album, Andrew Peterson pens a number of poignant retellings of the Old Testament.  First, it opens with "Gather Round, Ye Children, Come", which introduces us to the story of Jesus Christ and encourages us to "Sing out with joy / For the brave little boy / Who was God / But He made Himself nothing."  "Passover Us" tells the story of Israel being enslaved in Egypt and the celebration of the first Passover.  The latter song includes some great keyboard and electric guitar stylings along with Andrew's acoustic guitar, while the former features a nice string arrangement and more of a country feel.

Now that Israel has reached the Promised Land, "So Long, Moses" tells the story of God's people wanting a king, not a prophet, and then breezing through the stories of Saul and David.  In fact, this six-minute track moves past the "broken kingdom" to the prophet Isaiah prophesying, "'From you, O Bethlehem / Small among Judah / A ruler will come / Ancient and strong.'"  Throughout the album there are many great folk/country artists and friends of Andrew Peterson contributing, but one of the most noticeable is Derek Webb's lead vocals in "Deliver Us," which reflects on the sorry state of the Israelites before Christ's birth and their longing for God to deliver them.  Like almost every song in this album, the song features beautiful acoustic guitar and a lush, orchestral instrumental backdrop.

Transitioning from the backstory to the actual story is a beautiful instrumental arrangement of "O Come, O Come, Emmanuel" on acoustic guitar, fiddle and mandolin.  Then is one of the favorites of listeners, "Matthew's Begats," a musical recitation of Matthew's lineage from Abraham to Jesus, featuring Andrew Osenga on "uber-happy guitar", Kyle Reeder with "mandolin chops", Laura Story on upright bass, and Ron Block (from Alison Krauss's band Union Station) on banjo.  It's a rousing, fun, two-minute bluegrass jam before the meat of the story is introduced.

In "It Came to Pass", we are introduced to our two main characters, Mary and Joseph, and that the begin their trip to Bethlehem for the census.  Jill Phillips offers her background vocals throughout the album, but "Labor of Love" is sung by Phillips about the young Mary, "the girl on the ground in the dark," and the pangs of labor in a barn in Bethlehem.  Despite it being one of the most beautiful songs on the album, it is not an easy ballad to listen to because it points such a clear picture of the hardship that Mary and Joseph went through to bring Jesus into this world.  A second acoustic interlude to the album is "The Holly and the Ivy" quietly plays at the time that Jesus is born and our story continues.

The third portion of the story flows right out of "The Holly and the Ivy" to tell of a whole host of angels appearing to shepherds outside of Bethlehem singing "Hallelujah, Christ is born."  From there, in "Behold the Lamb of God", the shepherds (and us, the audience) witness the baby Jesus.  This song features some powerful strings, piano and percussion as well as the backing vocals of Fernando Ortega.

To wrap up our story, "The Theme of My Song/Reprise" recalls the main themes of the songs throughout the album and brings back the theme of the first track, "Sing out with joy / For the brave little boy is our Savior / Song of God, Son of Man".  Appropriately, it ends with a live snippet of an audience singing the chorus of "O Come All Ye Faithful," another beautiful moment of worship.  (The credits for this snippet have been copied from the 2004 original release but sadly this part is left off of the 2009 release for an unknown reason.)

The original version of Behold The Lamb of God was released in 2004 and I've been enjoying it every Advent since then to reflect on Christ's coming.  This new Tenth Anniversary Edition is "remastered", but honestly, I cannot really tell much of a difference.  The mix may be slightly different because it feels like the music "pops" out of my speakers a bit more, but playing a couple seconds on each version back-to-back rarely sounds discernibly different.  The packaging of the new edition is a nice double-disc package which features the original artwork as well as new artwork from Evie Coates.

Included in the 10th Anniversary Edition is a CD of a live 2008 performance of the tour.  One gem is Andrew Peterson's introduction to the concert (taken from the Jesus Storybook Bible by Sally Lloyd-Jones) in which he likens the story of Christ's coming to a fairytale with princes and kings.  The instrumentation of the concert is a bit more raw but very faithful to the sound of the album.  The lead vocals of "Deliver Us" are done by Bebo Norman instead of Derek Webb in the live version.  Also, Andrew Osenga's electric guitar work seems to be more prominent on the live version and a couple jokes are added into "Matthew's Begats" which add to the live feel.

Behold the Lamb of God has been performed every year since 2001 in Nashville's Ryman Auditorium and it has become a bit of a local phenomenon.  Over the years, the Ryman Auditorium concert has featured such notable guests such as Alison Krauss, David Wilcox, Pierce Pettis, Mindy Smith, Buddy Miller, Sean and Sara Watkins (Nickel Creek), Matt Slocum (Sixpence None The Richer), Sara Groves and many more.  Also, Randy Travis covered "Labor of Love" for a Christmas album of his.  Every December, Andrew Peterson and his friends tour to churches around the nation to perform the concert.  Churches around the country do their own performances of Behold The Lamb of God thanks to the music being available on Andrew Peterson's website.

Yet, Behold the Lamb of God is not at all about the hype.  The core of it is Andrew Peterson and a tight-knit family of Nashville-based musicians who love praising and worshipping God through their music.  The story is the greatest story ever told: how God came down to earth as a human to save all humankind.  Andrew Peterson and crew has crafted a beautiful and powerful way to reflect and prepare for Christ's birth as well as celebrate Christmas.