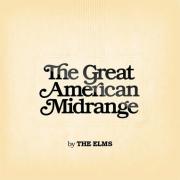 Although this is the image of America that many around the world hold, there are the unsung heroes of these United States.  These more simple folks work hard just to keep food on the table for their families.  They don't go down to the club on a Saturday night; they just stop by the bar for a drink with a few friends or sit on the front porch.

Thankfully, the honoring of these unsung heroes has continued through the decades of pop music, from Woody Guthrie to Credence Clearwater Revival on through John Mellencamp, Bruce Springsteen, and Tom Petty.  One band continuing this rich tradition is Seymour, Indiana's The Elms and their latest album, The Great American Midrange.

First, every good rock album has to have the big, all-out jams.  The album opener, "Strut", as well as "The Shake" are pure Friday night feel-good tunes that also work just as well filling an arena.  And although the rest of the album may not get you jumpin' out of your seat like these two, all the songs have a perfect blend of guitars, bass and drums that are both classic and appealing to the modern listener.

The heart of the album is definitely a tribute to the unsung heroes of America, including "County Fair" and "The Good Guys".  A number of the rock tracks, such as "The Little Ways" and "Back to Indiana", tell of love separated by miles and miles of interstate freeway and the hope of seeing the loved ones soon.  "Thunderhead" speaks of protecting the ones we love from the hazards of life as well.

As much of Middle America is filled with church-going folk, The Elms also show their spirituality without getting anywhere near preachy.  "Unless God Appears First" tells of personal imperfections without apologizing for them, closing with the tagline, "unless God appears first, I will die this way."  Later, The Elms challenge their listeners to preach the Gospel with "This Is How The World Will End".  In this exciting tune, they tell of many signs of the so-called "end times" but "if that certain light won't shine again / Baby, this is how the world will end".

Despite a band known for an unabashed love of rock 'n' roll, The Elms bring their A-game to the slower songs as well.  The aforementioned "This Is How The World Will End" starts as an acoustic ballad but slowly grows to a rock anthem.  And "The Wildest Heart" and "A Place In The Sun" celebrate the quiet, unseen moments of life cherished by only those that experience them.

If there's anyone that works hard to give America the music they need to hear, The Elms go the extra mile.  No expense is spared, with a simple but powerful foil-stamped, embossed cover.  The booklet includes photos taken at a local Indiana car manufacturing plant that has been closed since 2001.  And fans who download the album from their site will also receive the acoustic version of all twelve tracks.  And these aren't just one-take, in-studio acoustic recordings - these are a full re-recording of every track for another look at these exciting songs.

No matter if you live in the Midwest or on the coasts, The Elms's The Great American Midrange can be the soundtrack for your life.  It not only encourages the listener to work hard and live life to the fullest, but it also inspires them to enjoy the little moments in life.  An instant classic, this will definitely be an album that I listen to for years and years to come.