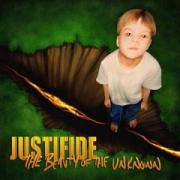 With Rage Against the Machine gone and Limp Bizkit in limbo, it appears as though the rap/metal experiment (hated by virtually every critic other than this one) is on its way out. Whether Justifide, whose Dove nominated Life Outside the Toybox was peppered with hip hop, is aware of this or not, they seem to be another band who is moving away from (some would say "maturing") that end of the spectrum.