Red is not silent - a few moments with Michael Barnes 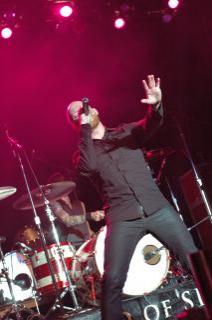 We first met Red at GMA week in 2006 as part of a New Artist Feature.  Two years later, the quintet from Nashville is still touring on their debut release, End of Silence.  We had the privilege of meeting up with Michael Barnes, lead vocalist, during his few short hours in his hometown during a tour with 3 Doors Down.  It was a spontaneous interview, yet packed with great information.  In the ten minutes we sat down together while Michael ate lunch, we found out a bit about what Red has been up to since we last sat down together, some discussion about “Christian” versus “mainstream”, the direction of their sophomore release, and more.

inReview: Two years ago when we met, you were a fairly new band.  Tell us a summary of what has been happening in the last two years.

Michael: Last year just doing a lot of shows.  We have been touring a lot.  Last year alone we did about 250 shows.  [We were] on the road for about 300 days, really.  We have just been really busy.  We played with some bands like Sevendust, Breaking Benjamin, Three Days Grace, and just recently with 3 Doors Down.  Just really taking off, doing well.

inReview:  Explain the difference between doing a “mainstream” kind of tour versus a “Christian” tour.

Michael: Mainstream is not too much different.  Really as far as content it is a little bit different.  Like the tour that we are on right now with 3 Doors Down, they are all Christian guys and everything.  But as far as saying stuff from stage, we don’t usually do that on a mainstream tour because the people that show up there are not there to really hear what the message is about and they don’t know who we are.

So the purpose of those tours is about introducing who we are at first.  And usually people that do know who we are kind of find out who we are through listening to articles or [reading] something that maybe you have written.  And they do a little research.  We meet after the show.  We every single time with the fans just to say, “Hi,” right after we are done playing and to sign signatures and stuff.  And usually that is the time when they ask us, “Well I heard you guys are a Christian band.  What’s that about?”  And that is usually the time we can spend telling them who we are as individuals and what our music is about. 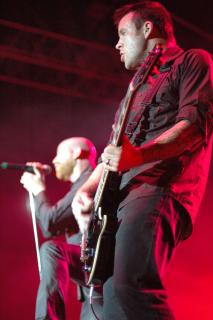 But on Christian tours, it is a lot different.  It is definitely more open.   People are there expecting to hear a certain thing and to hear about God and everything.  So we are definitely more open when it comes to those things.  But we feel as a band that we have been called to reach out to those dark areas.  We feel real blessed that God has given us the opportunity to be on those types of tours to reach a whole new audience.

inReview: So if you could take away the distinction between “Christian” and “mainstream” music, would you?  How would you do it?

Michael: Taking away the distinction is good in a way because we are all Christian guys.  Look at it this way.  Think of a plumber.  He doesn’t just do Christian plumbing.  He doesn’t just do Christian people’s houses.  But God has called us in whatever avenue that we are in, whether you are a plumber or whether you are an accountant.  If you are a Christian, to reach out to the people that are in your circle.  That is how we feel called.  Not only reaching out to the people in the audience but also to the bands that we tour with that aren’t Christians.  Just sharing the love that we have in our hearts to them.  And just speaking words of truth and life into them that they sometimes just don’t get to see through day-to-day life.  So I definitely feel like skewing the lines as far as that goes.  To us, we are Christians and I guess it really does not matter to us as far as that goes.

inReview: What song have you played live that you were surprised at the response from the audience?

Michael: Actually, “Already Over” has been getting a huge response.  And we don’t expect it either because it is kind of a slow, laid back rock ballad that comes in a little heavier in the chorus.  Especially when the chorus kicks in we notice in some areas the crowd will kick and start a mosh pit. 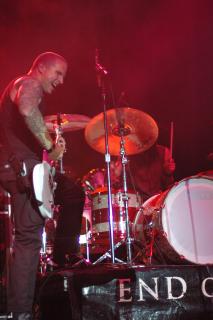 And we are just like, “Where did that come from?”  And for the tour that we are on [with 3 Doors Down], we are doing “Pieces.”  And that is creating a huge response, too.  Just because it is more friendly for them.  They are more of a rock top 40 band.

inReview:  So two years ago, we talked about the same album.  Is there any new music coming out?

Michael: Yeah, we are definitely working on some stuff.  At the beginning of this year, we took some time off to get stuff more laid down.  And we are going to take more time off here and there throughout this year to get finish it up.  But we really want to take our time on it just like we did on the first record as well.  Like do some tracks and sit with it a little bit and rewrite it.  It is kind of what we did for the last record, too.  We would write some songs over and over again, sometimes five or six times.

inReview: So on the first album, there were songs written by others.  How is that going to be different for the next album?

inReview: So this is the question that I always ask.  Are you afraid of the sophomore slump? 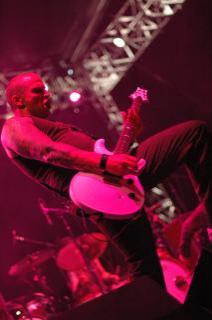 Michael: Yeah, I mean we all in the band have talked about that.  That is why we feel that the first record - we kind of want to do the same things as far as taking our time with the music and really just sitting with it and thinking, “Is that finished?  Is this the best that it can possibly be?”  That is what we did with the last record.  And I think if we do that with this record and we take our time, then it will come out and the audiences will like it.

inReview: Is there anything else you want to add?

Michael:  A new video for “Already Over” just came out.  That is our new single in the mainstream.  “Lost” is the new single right now in Christian rock.  Filming the video in LA was awesome.  It was actually our first time we had this huge green screen behind us.  It is a little awkward at first because you don’t really have anything to play with.  All we had was our amps and stuff.  To see the finished product afterwards is amazing.  To see how much they can do.

We actually did the video in two days.  The first day was just the band.  And then the second day was some of the acting parts.  I actually got to do my part, the acting part.  They had this like wall with two rooms.  One was more light and bright and the other one was a little bit darker.  It was cool.  I actually got to do some things.  It was a little awkward at first because they do a lot of CGI [computer generated imagery] effects.  So they had to pretend there was vines pulling my arms down.  So I had to reach out and pull back and lay on the ground like I was dead.  But when you saw the finished product, it was like, “Ok, now it makes sense.”  It was a lot of fun.  It is always nice to be in LA.