The Washingtom Projects go beyond the Resistance 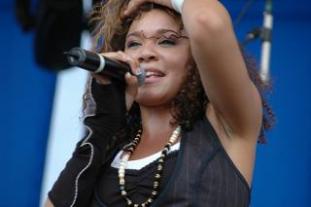 The Washington Projects may be new to some, but siblings Jekob Washington and Rachael Washington are not new to the music scene.  In fact, they are two of the three original members of The Souljahz.  "The Washington Projects is all about spreading love, hope, peace, joy, happiness through music, hip-hop, R&B, a blend of folk, soul, bluegrass, and everything else”, explained Jekob when we sat down with them during GMA week in Nashville this past April.  Commanders of the Resistance was released by the duo in October, 2007.

We found some interesting quotes from the band at various places online and decided to ask them to discuss them further.  The following lists the quotes and responses in this exclusive interview

"Within The Washington Projects, we're Christians living in the world who are simply talking about real life through the perspective of people who are saved, even though every song might not overtly touch on these topics."

Jekob:  That basically is our definition of not sugarcoating what life is as a Christian. Our goal is to really tell people through the music and portray to them what we've learned and how to deal with situations through Christianity. That's what we do. We learned that growing up and we've seen it in real life. And we try our best to portray those situations, whether it’s about love, or about God, or about whatever. Just to portray that in the light that God has shown us in our lives.

Rachael:  It’s really important for us to be real with our audience. So I think that's maybe the biggest thing about us that sets us apart in a sense is the authenticity of our music, about our message, what we're talking about, all that stuff comes from our heart from our own experiences. Its been really important to us through our "Souljahz" career and throughout Washington Projects just to always be real about what's going on and to address things that are going on in the world. We're trying to be different. We're trying to set ourselves apart. We're not trying to sugarcoat anything. Kids are going through really tough situations these days, and a lot of people are afraid to address it. For us we're not afraid to talk about that stuff and to talk about things we're going through. And to give them God's perspective on that.

"Listen, in almost every way the world has perverted the very gifts God has given us to enjoy in this life. Relationships, love, fun, dancing, fellowship, etc. to the point that many people in the church today think it's wrong to sing about, or express them at all."

Jekob: The reality is that, there are a lot of people today, and obviously we're here at GMA, it’s a lot of the Christian industry. What we've seen when we started doing music ten years ago was it wasn't about a specific industry. We didn't really know that there were separate, complete divided industries for Christian and mainstream. We just thought it was what it was: music! Our goal goes back to authenticity. I think people have it twisted. That the world has turned those words, when you say "love." For example, we have a song on the record called "she can't love you." It’s a good example of what we've been saying. We've been questioned so many times, even with this record, just "what did you mean like that, sex?" "No, love." That whole mindset, our goal is to shift in the mainstream as well as shift it in the Christian industry, because that should not be seen that way in the Christian industry, it should be understood that they are two different things. There's a way to approach that, to write about it, to talk about it without being worldly, or whatever you want to call that.

"To break the mold of traditional thinking in the church and Christian industry that teaches 'if the world accepts it and plays it, it is not of God.’ “

Rachael: Funny story, we got an email that someone was saying that they tell their youth kids on purpose that if anything is accepted by the world, then its not of God. So if its something that’s being played on TV, and its popular, its not of God. If its being played on the radio, and its mainstream, that is not of God. And we were just thinking that’s a really sad way to be thinking, and its a really bad thing to be teaching kids. Because aren't we supposed to be a light in the world, and a light in the darkness? Not a light in the light? It just doesn't make any sense.Jekob: We all were drawn to God at a certain point. We were born in sin, so at some point in our lives if we are Christians and we were drawn to God as worldly people, whatever that was, whether it was in a song, or in church or whatever you saw or heard. That’s the point. 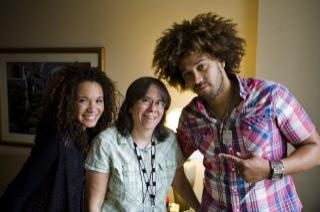 Rachael: They take the 'in the world and not of the world' literally where we're not supposed to even be here. Like 'lets all be in our own Christian bubble and not even relate at all.' Its ridiculous, because the reality is that everyone who is Christian has relationships, has friendships. They have all the same things that people who aren't Christians have, they're just saved by grace, and these other people haven't heard about it yet. Its too much of a stigma that people put on themselves. If you look at the way Jesus walked on this earth, that’s not the way he was at all. He did the opposite of that. We want to be a light in the darkness. We are not called to be a light in the light. Some people are, but we're not saying that if you do worship music to edify the church, that’s not your calling, that’s awesome, but that’s not what we're called to do. We want people to stop wasting their time and to go out and do their calling. Everyone in the body of Christ has different callings. Us particularly, we are called to do music in the mainstream world to meet people who don't know Christ. A lot of people have taken that from our record even though some people haven't.