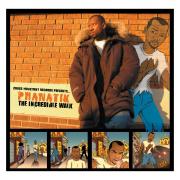 Cross Movement has seen better days. The crew that once captured the interest of mainstream rags like The Source and Time and seemed poised to burst through the atmosphere of the Christian industry has been laid relatively low lately. Their most recent LP was released on a label of their own making that hasn't made many waves outside of the CCM harbour. And even within the Christian industry, Cross Movement Records is by no means a heavy hitter in the vein of Gotee, the current hip-hop powerhouse, or the former Uprok Records.